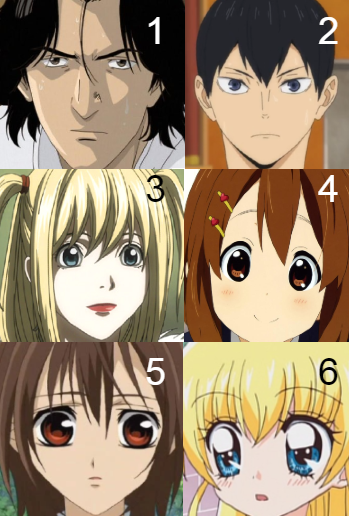 Large eyes emphasise the youthfulness and cuteness of a character. They also make it easier to convey complex and nuanced emotions. Eyes are an important tool for emotional communication for humans; the difference between Japanese and occidental smileys (which focus the information on eye and mouth shapes, respectively) would suggest that the importance of eyes is even higher in East Asia.

Incredibly large eyes are one of the most famous and recognisable elements of anime and manga. Large eyes are ubiquitous in shonen and especially shoujo, which also happen to be the two best known demographics outside of Japan. Chibi style, again common in manga and anime aimed at kids and teens, exaggerates the eye size even further. It's important to note that older shonen (and some newer ones) avert big anime eyes, with the eyes instead tending to be either narrower or realistic.

With "anime eyes", not only does the size increase, the shape is also exaggerated (and usually gives a hint as to whether the character is generally active or passive), the iris and the pupil grow in proportion and change shape to compliment the general eye shape, and especially in the romantic genre, the reflections are greatly exaggerated. Horizontal lines above the eyes represent the folds of the upper lid and are not necessarily realistic for Asian characters, but serve as a visual anchor that makes for a lightning-fast distinction between a narrow eye and a half-closed eye. The range and flexibility of the eyebrows is also exaggerated.

Thus big eyes are very very popular for characters intended to be cute and endearing, and in genres which rely greatly on emotion and melodrama. Even works that employ more realistic proportions use eyes as a major tool. However, out-of-context- or over-use of large eyes can, intentionally or unintentionally, place a portrayal in the Uncanny Valley. Only in the gag genre and some more experimental styles are eyes downplayed.

On the other hand, characters with small and possibly oversimplified eyes are usually intended to be incredibly ugly, and are used more as tools for gags rather than fully-fledged characters. Characters with no eyes at all are the faceless mass, part of the background, moving standies, or perhaps intended to be as emotionally distant from the other characters and the reader as possible.

Interestingly enough, we actually partially have western animation to thank for this. The trend of big eyes in Japanese Media was started by Osamu Tezuka, considerated by many as The Father/Godfather/God of Manga, who was influenced by western cartoons such as Classic Disney Shorts, Fleischer cartoons like Betty Boop, and films like Bambi to get this kind of eyes in his creations, notably Astro Boy. His works became so important for the industry (first manga and later anime) that the concept of "anime eyes" was widely accepted and much of the works use this kind of eyes until today.

"Anime Eyes" is an Omnipresent Trope in Japan, so the list of works would be huge and widely common, and this article will only list Western or non-Japanese works that use this as a resource intended to be "anime eyes". In the case of works from Japan, examples should only be added if they are cases of Lampshading, Subversions and Aversions. It is a stereotype that all anime and manga do have characters with anime eyes; however, because of their expressive nature, it is much more common for media aimed at young children to have large eyes than other demographics. Seinen and Josei do have more proportionally accurate drawn eyes (although they are still slightly enlarged).

Compare Puppy-Dog Eyes, Anime Hair and Disneyfication or Cartoony Eyes (a Western version). Strongly related to Good Eyes, Evil Eyes. In live-action media, frequently used in combination with Serkis Folk. See also Mukokuseki, which applies this to everyone regardless of ethnicity, Animesque and OEL Manga, in which Western and non-Japanese creators draw their creations with big anime eyes as a way to emulate and/or make tribute to Japanese Media.

open/close all folders
Anime and Manga
In Japanese Media, this is an Omnipresent Trope (Osamu Tezuka being both the Trope Maker and Codifier), so the examples in this section are exclusively about Lampshading, Subversions and Aversions of this trope. For the same reason, examples from Tareme Eyes and Tsurime Eyes shouldn't be mentioned here since they're all straight examples.
Comic Books
Fan Works
Films — Animation
Films — Live-Action
Literature
Live Action Television
Music
Tabletop Games
Toys
Video Games
Web Original
Western Animation
Real Life