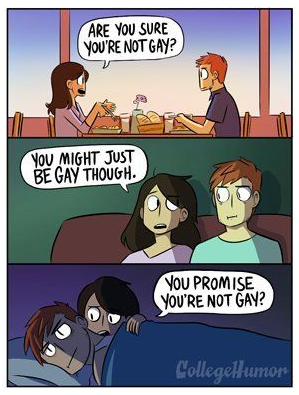 Max: Are you into her? Because here I was thinking you were gay.
Michael: We are literally aliens, and you're going to hold me to some outdated binary of sexuality? I'm bisexual, Max. It's not that complicated.
— Roswell, New Mexico
Advertisement:

Romance, sex and relationships are often prominent plot points in media texts. So naturally over recent years, the spectrum of sexuality represented has only grown to be more diverse and inclusive. Women marry women, men marry men, but that doesn't mean the characters are always gay.

This trope is when a character who previously presented themselves as straight has attraction with someone of the same sex or gender, in addition to the opposite. This often sparks major Character Development, especially if the protagonist is going through it. They may have preconceived notions about what being attracted to the same sex means and burden themselves with worry. It's especially worrying for them if they're already dating someone but don't know how to tell them. Heteronormative upbringings may lead them to become depressed, anxious, or guilty about their feelings. This trope is similar to No Bisexuals in that the word "bisexual" may not be mentioned, however, this trope is related to the specific confusion that comes when attracted to both sexes.

A character may evoke Gayngst or think they are gay based on their opposite-sex attractions. This, in addition to confusion about bisexuality, can lead them to question themselves. Characters will typically assume said person is gay because bisexuality is less ingrained in society. They may project ideas of sexuality onto the person to compare them with other queer people. In actuality, bisexuals are the most common sexual minority.

A common iteration of the trope is when a character has same-sex relations and creates confusion amongst people who thought they were gay or straight. Characters who struggle with another's bisexuality are often ex-lovers or family members who remember them dating people of the opposite sex, and may question the legitimacy of their sexuality. The bisexual character's attractions further confuse others if they begin dating someone from the opposite sex again.

The trope also applies to characters who previously identified as gay, but begin having attractions to someone of the opposite sex. In some cases, they identify as bi, but later realise they are gay or straight. Note that similar experiences occur when someone realises they are pansexual.

As this is Truth in Television, No Real Life Examples, Please!.

Of course, calling him bi isn't really accurate either, since he'll pretty much have sex with literally anything. Like one of the mattresses in the on-call room. And he fantasizes about one of the other mattresses while he does it.