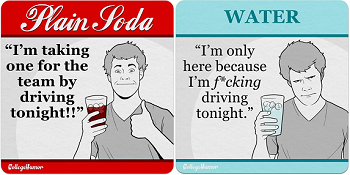 Both sides of the spectrum.
Advertisement:

At a party or other place that results in a lot of drinking on TV, especially if the place is far enough away to require driving, there is usually one person, pre-selected or out of his/her own volition, who has to not drink at all in order to remain sober enough to drive the other partygoers/drinkers home safely. This is known as the designated driver. This is a Truth in Television, as most times in order to follow road safety laws, people aren't allowed to drive home if drunk.

It should not be confused with either Designated Hero or Designated Villain, which deals with something else entirely. If the designated driver's companions are doing things rather more dangerous than drinking, that's a Getaway Driver (although overlap is not impossible, depending on how able-bodied the drunk are).