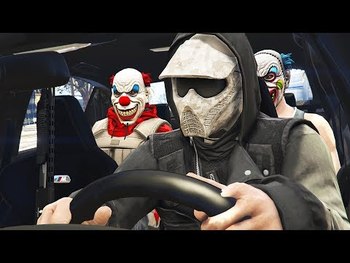 Someone has to ensure these clowns get away safely...
Advertisement:

Criminals rob a bank, and realize that the police are coming. That's where the Getaway Driver comes in. It's this guy's job to come in and drive the criminals away from cops with a chase scene to follow. It's pretty much always a requirement for the guy to be a Badass Driver for the escape to be successful.

See also Gangland Drive-By, where a skilled and fast driver is also needed before and after the criminal deed is accomplished.