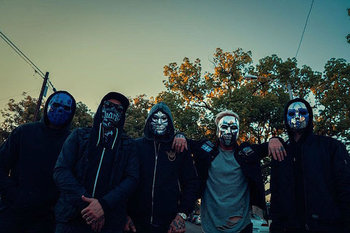 UNDEAAAAAAD!
"Everywhere I go, bitches always know, that Charlie Scene has got a weenie that he loves to show."
—Chorus from "Everywhere I Go".
"I think I've lost my mind, but I'm feeling so alive what a pity, it's so pretty, looking through the bars and I see my city."
—Danny singing the chorus from "Usual Suspects".

Hollywood Undead are a Nu Metal/Rap Metal band from Los Angeles. The band got their start writing rap songs about Emo Teens and posting them on MySpace. After gaining a following, the band's founders decided to officially form a band with anyone who happened to be in the room at the time, no, seriously. The band was the first act signed to MySpace Records, then switched over to A&M/Octone Records, where they released their first album, Swan Songs, in 2008, which had a mostly Hip-Hop-oriented sound with a few rock songs. This was followed by a live album mostly consisting of songs from their debut and a few covers (including Led Zeppelin and Mötley Crüe).

After a long hiatus (partly caused by one of the founding members leaving the band), they released their second studio LP, American Tragedy, which featured a more rock-oriented sound. Critics and fans alike assert that the album is their best album to date, and it has done really well on Billboard charts (hitting #4 on the Billboard 200).

We are tropes, but we have heart!