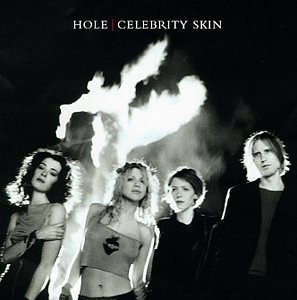 Oh make me over, I'm all I wanna be
A walking study in demonology
Crash and burn
All the stars explode tonight
How'd you get so desperate?
How'd you stay alive?

Help me, please
Burn the sorrow from your eyes
Oh, come on be alive again
Don't lay down and die!

Hey, hey
You know what to do
Oh, baby, drive away from Malibu
—"Malibu"
Advertisement:

Celebrity Skin is the third studio album recorded by American Alternative Rock band Hole. It was released globally through Geffen Records on September 8, 1998, and through Geffen's DGC Records label in the United States the next day.

It was the band's last album before they dissolved in 2002 after a period of inactivity. Celebrity Skin is Hole's most commercially successful record, receiving positive reviews from critics, selling 1,400,000 copies in the US alone and is platinum certified in Australia, Canada and the USA.

The Celebrity Skin era was a tumultuous time for the band, with drummer Patty Schemel being replaced with session drummer Deen Castronova at the suggestion of Record Producer Michael Beinhorn, causing her to quit the band and drop out of the tour. Celebrity Skin is the only album featuring bassist Melissa Auf Der Maur, who replaced previous bassist Kristen Pfaff (who tragically died in 1994).

Celebrity Skin is notable for being Lighter and Softer than Hole's previous albums, Live Through This and Pretty on the Inside, and features contributions from musicians outside the band, primarily Billy Corgan from The Smashing Pumpkins, who co-wrote five songs on the album.

The album went Platinum in the United States, and Gold in the United Kingdom, peaking at #9 on the Billboard 200 album chart, and #11 on the Official Charts Company album chart. Three singles supported the album: the Title Track, "Malibu", and "Awful". All three were high hits on the Billboard Alternative charts (with "Celebrity Skin" hitting #1), and would be Top 40 hits on the UK Pop chart.

The song "Celebrity Skin" would also be used in the 1998 film American Pie.