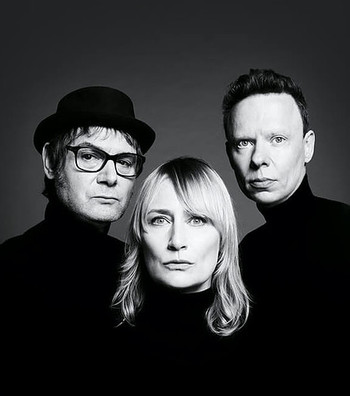 Hooverphonic is a Belgian band.

Originally consisting of vocalist Esther Lybeert, keyboardist Frank Duchêne, bassist Alex Callier, and guitarist Raymond Geerts, Hooverphonic began as a product of the '90s trip hop scene, but have since been more broadly described as an electronic pop-rock band.

Since their founding, Hooverphonic has seen frequent turnover in personnel, specifically regarding the band's lead vocalist. Liesje Sadonius replaced original singer Lybeert before the release of their debut album A New Stereophonic Sound Spectacular in 1996, but departed herself shortly after. Following a brief stint fronted by Kyoko Bartsoen, Geike Arnaert became Hooverphonic's permanent vocalist from 1997 to 2008, the longest tenure to date. Noémie Wolfs then replaced Arnaert from 2010 to 2015. Hooverphonic proceeded without a vocalist for three years until Luka Cruysberghs joined in 2018. Arnaert returned to the lead vocalist role in November 2020, a change which Cruysberghs said she was informed of on Zoom.

Though they may not be familiar by name to those outside Belgium, Hooverphonic's music has been used in a variety of American film and television projects, including the likes of I Know What You Did Last Summer, Entourage, CSI: Crime Scene Investigation, and The Umbrella Academy.

In October 2019, it was announced that Hooverphonic would represent Belgium in the 2020 Eurovision Song Contest, having the distinction of being the first act confirmed for the competition that year. However, it was later decided they would represent Belgium the following year (in 2021) after the 2020 edition was canceled due to concerns over the COVID-19 Pandemic (they did, however, elicit anger for being the only act to not participate in the cover of "Love Shine a Light" that involved all other would be 2020 entries, and was the centerpiece of the replacement telethon). They eventually competed in the contest with the song "The Wrong Place", qualified from the semi-final (giving Belgium their first qualification since 2017) and ultimately placed nineteenth in the final.