Music / His Name Is Alive 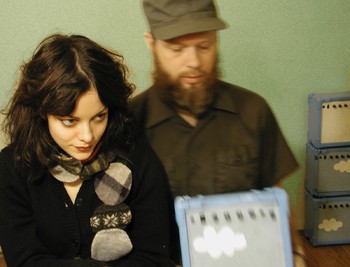 His Name is Alive are a rather eccentric experimental rock project from Livonia, Michigan, currently based in Detroit. Founded in 1990 by guitarist, composer, and sole constant member Warren Defever, the band is fond of Genre Roulette, having recorded songs ranging from Dream Pop, alternative rock, funk, prog rock, and Baroque Pop to experimental noise and gothic ambient compositions. The band was originally signed to 4AD Records, under whom they released a string of critically acclaimed records throughout The '90s, but were dropped by the label in the early 2000's after failing to meet sales expectations. After this, the band went defunct until 2006, when Defever revived the project with a new lineup. Since then, the band has steadily released new records and shows no signs of slowing down.

Across multiple decades and lineups, His Name is Alive have released over 100 recordings, many of them extremely limited edition tapes or CD-Rs. All of their post-reformation music can be found on their Bandcamp page

. Their 4AD material is available on most streaming services, as well as scattered across YouTube. Below is a list of their full length albums.

Tropes displayed by His Name is Alive: