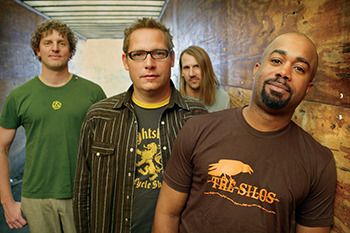 Hootie & the Blowfish is a rock band founded in 1986 by Darius Rucker, Dean Felber, Jim Sonefeld and Mark Bryan. They broke through in 1994 with the album Cracked Rear View, one of the best-selling albums in the history of American music (it sold over 16 million copies). It also produced four big pop hits in "Hold My Hand", "Let Her Cry", "Only Wanna Be with You" and "Time", and won the band the 1996 Grammy Award for Best New Artist.

Although followup Fairweather Johnson was also a decent enough seller, it produced only one big hit. Following Musical Chairs, the band went on hiatus (with both Bryan and Rucker releasing solo albums), and then came back with Scattered, Smothered and Covered, a compilation which produced no singles. The band left Atlantic Records after a self-titled album in 2003, but came back in 2005 with Looking for Lucky on Vanguard Records.

Darius Rucker began a rather successful Country Music career in 2008, but he continues to tour occasionally with his bandmates, and he performs several Hootie-era songs during his solo concerts. In 2018, after a ten year hiatus, Hootie & The Blowfish announced they had reunited. In 2019, they did a tour with Barenaked Ladies and released the album Imperfect Circle.

"And if the sun comes up tomorrow
Let her be
Oh, let her be"