Music / Blood on the Tracks 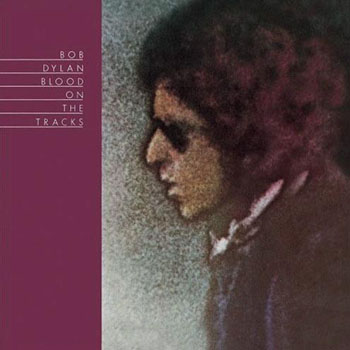 Lord knows I've paid some dues, getting through, tangled up in blue.
This is my favourite album ever. I spent the end of my teenage years and my early twenties listening to old music – Rockabilly music, stuff like that. Then I discovered Folk Music when I was 25, and that led me to Dylan. He totally blew me away with this. It’s like the great album from the second period, y’know? He did that first run of albums in the Sixties, then he started doing his less troublesome albums – and out of that comes "Blood On The Tracks". It’s his masterpiece. "Tangled Up In Blue" (...), it’s my all-time favourite song. It’s one of those songs where the lyrics are ambiguous you can actually write the song yourself. That’s a lot of fun – it’s like Dylan fooling around with the listener, playing on the way he or she interprets the lyrics. "It’s very hard to take individual songs off Blood On the Tracks, because it works so well as an entire album. I used to think "If You See Her, Say Hello" was a more powerful song than "Tangled Up In Blue" but, over the years I've kinda realized "Tangled..." has the edge, just for the fun you can have with it.’
— Quentin Tarantino, who, in a 1994 interview with Melody Maker about his personal Top 10 favourite albums, put "Blood On The Tracks" first place and "Tangled Up In Blue" second place, despite the fact it's just a song and from the same album.
Advertisement:
This is hard making records like this! You gotta keep three or four things going at the same time…just like life.
— Bob Dylan, after messing up a take of "Buckets of Rain", as heard on The Bootleg Series Vol. 14: More Blood, More Tracks

Blood On The Tracks is the fifteenth studio album by Bob Dylan, released in 1975.

After the Career Resurrection of Planet Waves and his 1974 tour with The Band, Dylan once again surprised everyone by releasing perhaps his most personal effort. The months after the tour had seen two major events in his life: his marriage to his then-wife Sara had become strained, and after years of amateur painting (including the covers of Music from Big Pink and Self Portrait), he took formal lessons with artist Norman Raeben

(son of Tevye creator Sholem Aleichem). Reflecting on his life, and on Raeben's advice that honest, unexaggerated depiction of reality was the highest form of art, he crafted a set of songs that used his trademark poetic wordplay to express the emotions and feelings of love gained and lost.

Initially recorded in New York as an acoustic-based album (with a few attempts at full-band arrangements), Dylan called off its release at the last minute, then re-recorded five of its ten songsnote "Tangled Up in Blue", "You're a Big Girl Now", "Idiot Wind", "Lily, Rosemary and the Jack of Hearts", "If You See Her, Say Hello" in Minneapolis, with group of local musicians assembled by his brother David Zimmerman.

A song left off the album, "Up to Me", was released on the Biograph box set in 1985, along with the New York version of "You're a Big Girl Now". Several other alternate takes and the previously-unreleased "Call Letter Blues" were included on The Bootleg Series Vol. 1-3 in 1991. In 2018, a Bootleg Series installment devoted to the entire album sessions, called More Blood, More Tracks, was issued to great acclaim (including from Kanye West, who tweeted some of the lyrics from "Up to Me" and invited Dylan to "get together" with him).

Also in 2018, Luca Guadagnino announced that he will make a film adaptation of the album

, from a screenplay by Richard LaGravenese. Chloë Grace Moretz has been cast as the female lead.

Tangled Up In Tropes: