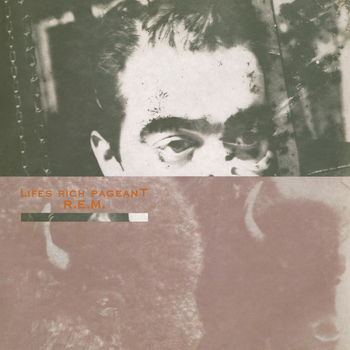 "Let's put our heads together and start a new country up."
Lifes Rich Pageant, released in 1986, is the fourth studio album by American Alternative Rock band R.E.M.. Following the Troubled Production of and initial Creator Backlash towards Fables of the Reconstruction the previous year, the band sought another shakeup of their sound and style, returning to production in the United States with the aid of Don Gehman, known for his work with John Mellencamp and, later, for producing Hootie & the Blowfish's first three albums.
Advertisement:

Contrary to Hootie's relatively safe and mellow sound, however, Gehman moved R.E.M. into a more Hard Rock influenced direction, leading them out of the opaque style of their first three albums and into a path more in-line with changing critical and audience attitudes towards alternative rock (which was beginning to favor more abrasive sounds as "authentic"). Fitting this change, not only did Michael Stipe trade out his murky, mumbling vocals for a more passionate and enunciated delivery style, he also focused more on themes of social activism and protest in his lyrics, influenced by his relationship with 10,000 Maniacs frontwoman Natalie Merchant (who had previously convinced him to write about the Native American genocide on Fables track "Green Grow the Rushes").

Lifes Rich Pageant marked a commercial turning point for the band as well, peaking at No. 21 on the Billboard 200— their highest US chart placement up to that point— and staying on the charts for 32 weeks straight. Lead single "Fall on Me" would also be the first to crack the top ten on Billboard's Mainstream Rock Tracks chat, peaking at No. 5 (though it just barely made the mainline Hot 100 at No. 94), and the album itself would be R.E.M.'s first to receive RIAA certification, reaching gold status at the start of 1987; it would additionally be certified platinum in Canada later that year.

Despite this, Lifes Rich Pageant was still supported by two singles: "Fall on Me" and a Cover Version of "Superman".

Kevin troped it on the radio: