I hope I die before I get old. 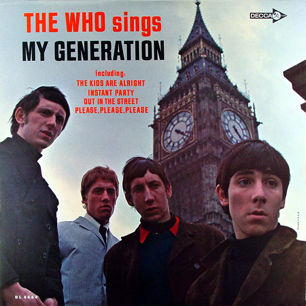 I don’t mind other guys dancing with my girl.
Advertisement:

Although it was a success on the charts — even being included on Greatest Album lists regularly — the band themselves are dismissive of this album, considering it to be a rush job not representative of their music at the time. Stylistically, the LP falls between two stools; it originally was to have consisted of primarily R&B/soul covers but after a preliminary track listing was disclosed in BEAT INSTRUMENTAL magazine many of the tracks were scrapped for Townshend-penned numbers. Some of these discards ended up on 45 and CD releases (e.g. WHO'S MISSING; TWO'S MISSING); all are curated in one place on the 2016 5-CD box set. Nevertheless, the entire album was inducted into the National Recording Registry for its "historical, cultural, and aesthetical importance" in 2008.

Hits and fan favourites include the title track, "The Kids Are Alright," "La-La-La-Lies," and "Instant Party (Circles)."

Tracklist (The Who Sings My Generation):

The Tropes Are Alright:

Alternative Title(s): The Who Sings My Generation