Film / A Shot in the Dark 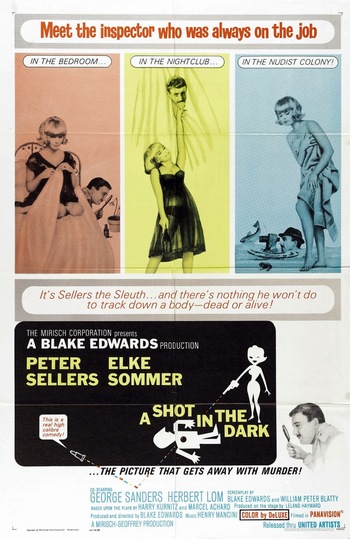 "Give me ten men like Clouseau and I could destroy the world."
—Commissioner Dreyfus
Advertisement:

A Shot in the Dark is the second film in The Pink Panther franchise, released in 1964.

Inspector Jacques Clouseau (Peter Sellers), now single, is summoned to the estate of the aristocratic Benjamin Ballon (George Sanders) to investigate the murder of Ballon's chauffeur. Clouseau's judgment is immediately clouded by his infatuation with the prime suspect, the maid Maria Gambrelli (Elke Sommer), even as more murders pile up around her, while his bungling drives his boss, Commissioner Charles Dreyfus (Herbert Lom), to homicidal madness. In the meantime, we're introduced to Clouseau's Chinese manservant, Cato Fong (Burt Kwouk), who—on his employer's orders—keeps springing surprise martial arts attacks on him.

Loosely adapted from the 1961 Broadway play of the same name, which was itself based on a French play called L'Idiote (The Idiot) and featured a cast including William Shatner, Julie Harris, and Walter Matthau (who won a Tony Award for his performance). Director Blake Edwards wrote the screenplay adaptation with William Peter Blatty, who later went on to write The Exorcist.

Despite being considered as part of The Pink Panther franchise, it's notably one of two films (the second being 1968's Inspector Clouseau) and the only film amongst the entries directed by Blake Edwards and starring Peter Sellers to not have "The Pink Panther" in the title, and to lack The Pink Panther character and theme. Not that it stops the former from appearing on covers of the film's home releases.