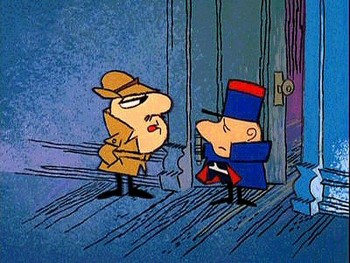 The Inspector and Deux-Deux.
Advertisement:

The second animated series from DePatie-Freleng Enterprises, and something of a Spin-Off from The Pink Panther series (specifically A Shot in the Dark), The Inspector can best be described as what would happen if you turned the Mind Screw of the Pink Panther films Up to Eleven, while dialling down the incompetence of its main character. The cartoons feature the titular Inspector attempting to solve surreal crimes in his home country of France, and generally failing miserably (occasionally, he would succeed miserably). The other main characters are the Inspector's dim-witted Spanish assistant, Deux-Deux, and the Inspector's boss, the Commissioner. Henry Mancini (the composer of the films) did the series' soundtrack.

There were 34 cartoons produced between 1965 and 1969, making it DFE's longest-running series apart from the animated Pink Panther shorts. The Inspector was also the companion series for the Pink Panther cartoons in The Pink Panther Show for its first three seasons, after which it was replaced by The Ant and the Aardvark. The eponymous Inspector also appears in the Animated Credits Opening of the 1968 live-action film Inspector Clouseau.

Both the Inspector and Commissioner were revived as recurring characters in the 1993 Pink Panther revival.

The Inspector provides examples of: