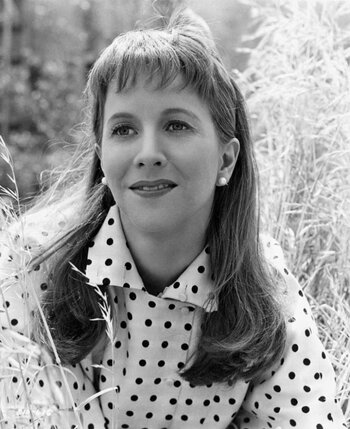 Harris gave acclaimed performances in films including The Haunting (1963), and Reflections in a Golden Eye (1967), the latter opposite Marlon Brando. She was also renowned for her classical and contemporary stage work, having received five Tony Awards for Best Actress in a Play, and for being involved in screen adaptations of the plays she appeared in; she reprised her role in the 1950 play The Member of the Wedding in the 1952 film of the same name, for which she was nominated for the Academy Award for Best Actress; and she won her first Tony Award for her role in the original 1951 production of I Am a Camera, and she subsequently appeared in the 1955 film version. Harris also worked extensively in television, earning eleven Primetime Emmy Award nominations and winning three, and even won a Grammy Award for Best Spoken Word Recording (The Belle of Amherst, which she also performed in a live stage production for PBS.)

Not to be confused with the Oscar-winning English costume designer of the same name.