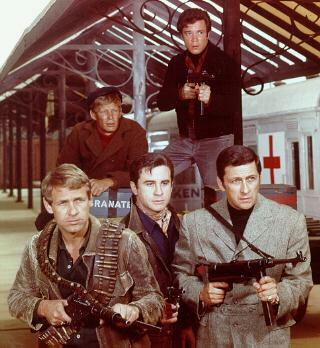 Garrison's Gorillas was an American TV series broadcast from 1967 to 1968; a total of 26 hour-long episodes were produced.

The series focused on a motley group of commandos recruited from stateside prisons to use their special skills against the Germans in World War II. They had been promised a parole at the end of the war if they worked out—and if they lived. The alternative was an immediate return to prison. If they ran, they could expect execution for desertion. The four were: Actor (Cesare Danova), a handsome, resonant-voiced Con Man; Casino (Rudy Solari), a tough, wiry safe-cracker and mechanic; Goniff (Christopher Cary), a slender, likable Cockney cat burglar; and Chief (Brendon Boone), a rugged, somber American Indian who handled a switchblade like he was born to it. Led by West Pointer First Lt. Craig Garrison (Ron Harper) and headquartered in a secluded mansion in England, this slippery group ranged all over Europe in exploits that often took them behind enemy lines. Other recruits were sometimes brought in where special skills were required.