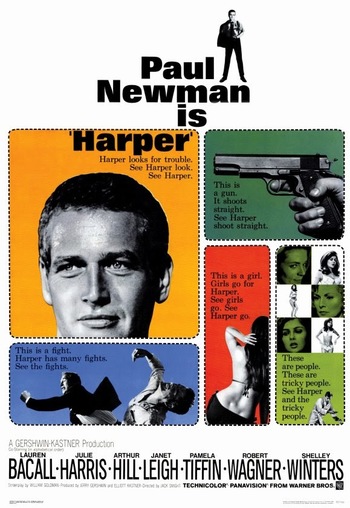 Harper is a 1966 mystery thriller directed by Jack Smight, starring Paul Newman, with a screenplay by William Goldman.

Lew Harper (Newman) is a rumpled, world-weary private detective who's in the middle of a divorce from his wife Susan (Janet Leigh). His friend Albert Graves (Arthur Hill), an attorney, brings him a job. Albert's client, Ralph Sampson, has disappeared. Sampson's embittered ex-wife Elaine (Lauren Bacall) certainly doesn't care if Ralph lives or dies, but hires Harper out of a sense of obligation more than anything else. Sure enough, Sampson has been kidnapped.

Based on Ross MacDonald's Lew Archer novel The Moving Target. Newman reprised the Harper role in the 1975 film The Drowning Pool.