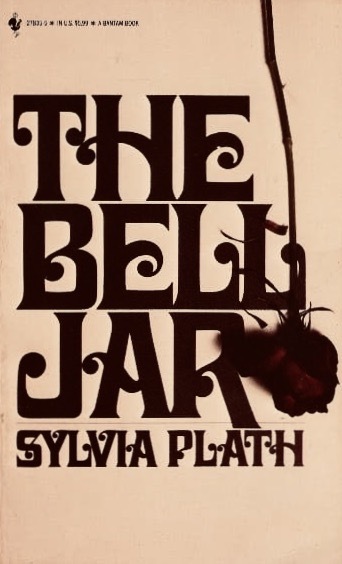 "To the person in the bell jar, blank and stopped as a dead baby, the world itself is the bad dream."
Advertisement:

Written by Sylvia Plath and first published (under the Pen Name "Victoria Lucas") in 1963, The Bell Jar tells the story of Esther Greenwood, a young, beautiful, successful nineteen-year-old girl whose talents and ambitions are being stifled by societal pressures. The novel opens with Esther in New York working on an internship at a big glamorous publishing company (obviously based on Condé Nast and Mademoiselle, where Plath really interned). The interns get dresses, makeup, free theater tickets and all sort of other gifts from sponsors. In the midst of this glamorous dream come true, all she can think of is how the Rosenbergs

are going to be executed. Esther feels increasingly isolated and troubled by her inability to enjoy herself in direct violation of what society expects.

Esther observes that being a successful woman and having a family are mutually exclusive in the eyes of society. If she marries, as everyone assumes without question, she will be expected to give up her "silly" notions of a career. She feels her virginity is a burden, but wants to have her first experiences on her own terms.

The internship over with, Esther returns to her mother's house. She is rejected for an advanced writing course she'd applied for, so she decides to spend the summer writing the Great American Novel, but realizes she hasn't had sufficient experience. Her condition worsens as she develops insomnia. She visits a psychiatrist, who utterly fails to help her; said failure is excruciatingly amplified by incorrect use of electroconvulsive therapy

She begins various half-hearted suicide attempts. Finally she leaves a note saying that she's gone for a stroll, conceals herself in a space in the cellar under a breezeway, downs a bottle of sleeping pills and loses consciousness.

. Esther undergoes ECT once more, reassured that if done properly it's "like going to sleep". She describes it as temporarily lifting the "bell jar" of her depression and letting fresh air in, while she engages in regular psychotherapy sessions with Dr. Nolan. Finally, she has someone to listen to and validate her honest thoughts.

Adapted into a 1979 film directed by Larry Peerce, starring Marilyn Hassett as Esther and Julie Harris as her mother. A second adaptation, starring Julia Stiles, was announced in 2007 but languished in Development Hell, and Stiles eventually relinquished the rights. Yet another adaptation, to be directed by Kirsten Dunst and starring Dakota Fanning, was announced for the big screen in 2017 but was subsequently aborted; two years later the project, still with Fanning attached, was reimagined as a TV series but that never came to fruition either.