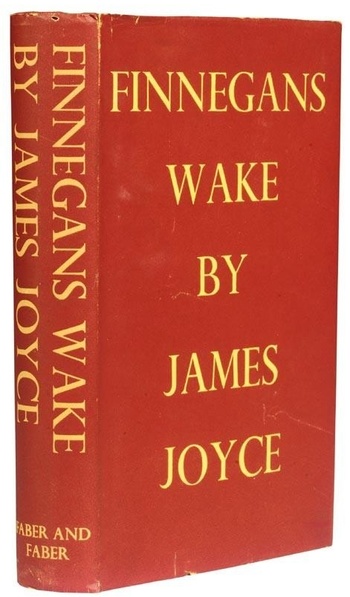 First Edition, Faber and Faber, UK
"Despite these obstacles, readers and commentators have reached a broad consensus about the book's central cast of characters and, to a lesser degree, its plot."
— The Other Wiki on Finnegans Wake
Advertisement:

Finnegans Wakenote The lack of apostrophe is deliberate. If you want rigidly accurate grammar and spelling, this is definitely not the book for you. is a sack of miscellaneous words that might generously be called a novel, written by James Joyce in 1939. It took him 17 years to write, and may take nearly as long to read. The novel is written in English but an idiosyncratic version of the language specifically created for this book. It is an English adapted and inflected with several multilingual and multilayered puns in the style of Lewis Carroll's Jabberwocky albeit on a far bigger scale. It contains elements, usually obscure puns, from over 60 world languages. The title is a reference to a 1850s Irish ballad called "Finnegan's Wake"note It has the apostrophe as you may notice, a drinking song that tells the story of a man resurrected at his funeral when whiskey is spilled on his corpse.

Joyce began writing the book after a year long sabbatical from writing after publishing Ulysses, and the novel was published serially in literary journals in the 20s and 30s under its Working Title: "Work in Progress". It was finally fully published in 1939 under its famous title, two years before Joyce's death. Right from the time of its serial publication, it has attracted controversy, fierce debates, and stern defenses.

The plot, discerned over careful readings, concerns a family in the Chapelizod area

of Dublin, a group of individuals identified as Humphrey Chimpden Earwicker (HCE), his wife Anna Livia Plurabelle (ALP), and their children — brothers Shem and Shaun, and the young sister Issy. Hilarity and Contrapuntal puns Ensue.

It helps to hear it being read aloud

If you would like to read a description written in the same style as the book, see the self demonstrating page.