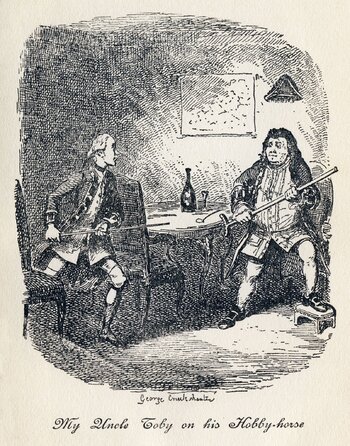 Non enim excursus hic ejus, sed opus ipsum est. ("For this is not a digression from it, but the work itself.")
— Epigraph to volumes VII and VIII, taken from the Letters of Pliny the Younger
Advertisement:

The Life and Opinions of Tristram Shandy, Gentleman is a novel written by Laurence Sterne in the 18th century. It's famous for being essentially Post Modern before its time — heck, before the modern style was at all common. It employs non-linear narrative and makes liberal use of stream of consciousness; while the book is ostensibly Tristram's narration of his own life story, he shows an almost pathological inability to stay on-topic and an obsession with explaining context and minute details, getting constantly sidetracked into lengthy digressions, and even getting sidetracked into another digression in the middle of a digression, which occasionally turn into digressions within digressions within digressions. This results in, amongst things, Tristram first actually getting around to telling the story of his birth three volumes into the work. As you can probably gleam from this, the humour is very meta; a large portion of the book explores the process of writing that very book.

It is widely considered unfilmable because of its meta nature. But some might argue that the work's non-linear nature could potentially lend itself well to a Interactive Fiction or even a video game adaptation. It was adapted into A Cock and Bull Story by Michael Winterbottom with Steve Coogan and Rob Brydon, which changes it to a film exploring the process of making that film.