Who Names Their Kid "Dude"? 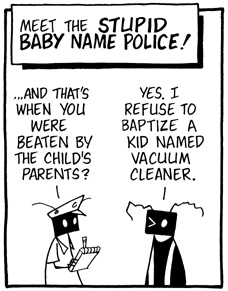 You know those Unfortunate Names — Embarrassing First Names, Embarrassing Middle Names, Gender Blender Names, Tomboyish Names, names nobody can pronounce or spell, or that expose the bearer to ridicule by being punny — if not at home, then as soon as they venture abroad — and other things that drive people to seek refuge in deed polls or Last-Name Basis, or make them press the Berserk Button? Let alone names that indicate exactly what the parents hope the child will become ("No, you may not skip your piano lesson, little Wolfgang Amadeus"), or give away their family background (class, parents' embarrassing choice of celebrity idols) in ways that expose them to all sorts of trouble when they venture into the wider world.

Suffice to say, somebody — usually but not invariably the parents — had to name them that way. They may have meant well. They may have done it out of family pride, or cluelessness, or not thinking about the unwanted Bilingual Bonus they're saddling the kid with. They may have named the kid after their favourite fictional character, politician or something even goofier. They may think having a bully magnet name will help the tyke build character. They may just hate kids. They may be rock stars, hippies or both, with child-naming habits to match. Or they might just have been hit with the fickle finger of fate when something happened after the child's birth to make the choice much less sensible in retrospect. (Being named Adolf in 1928 is one thing; being named Adolf now is another.)

At any rate, the effect is usually to make third parties ask the question: "Who calls their child that?", or in the more light-hearted cases, "I hope he inherited his parents' sense of humor." In extreme cases, may function as a Freudian Excuse, or lead to Calling the Old Man Out, or both. May induce a sense of being Cursed with Awesome or Blessed with Suck — let alone a whole bunch of problems if you've been saddled with a name to run away from really fast and it's not by your own choice. Even a name to trust immediately can lead to schoolyard jokes. In extreme cases, this trope may also lead others to decide that There Should Be a Law, which in a number of European countries there is, at least as far as the more obvious Unfortunate Names, names leading to Viewer Gender Confusion, or the use of surnames as first names. May also slightly stack the odds

against the child's future success.

This might also extend to cases where the kid, however grown-up they get, is never allowed to shake off a family nickname that would only be cute on a toddler, though probably not to embarrassing nicknames acquired in other settings, such as school. Children with names fitting this trope may also take refuge in nicknames or titles.

Obviously, one person's Awesome McCoolname is another's Unfortunate Name, and things can get touchy for those of us who have been blessed with names we took a while to come to terms with, or are still working on.

Please note this is not just a matter of people/characters having Unfortunate Names — this applies only when there is an In-Universe reaction to the fact. Compare Everyone Calls Him "Barkeep", A Dog Named "Dog", A Lizard Named "Liz" and A Dog Named "Cat".

No Real Life examples that do not include some sort of official reaction to the name.

Funnily enough, Bart has this reaction when he correctly guesses that his name is "Timmy Drake."

Some names are embarrassing because they're very obviously meant to convey their parents' political beliefs.

Some names are chosen because they're spelled a certain way or designed to look like something, to the point that they can't be pronounced properly or otherwise don't match what the kid's actually called.

Parents might not notice until it's too late that a name can be crafted into an Incredibly Lame Pun, especially when combined with the last name.

There Should Be a Law

Some countries have laws that are designed to prevent names like this, with varying levels of success:

In some cases, even when there isn't a law about stupid names, individual courts may determine that a name is ridiculous and order it changed:

Weird for the sake of weird

Why am I Analyzing This

Bob questions why would one of the ponies be named "Chariot" while she pulls a chariot before realizing he's analyzing a children show about magic, talking ponies.

Why am I Analyzing This

Bob questions why would one of the ponies be named "Chariot" while she pulls a chariot before realizing he's analyzing a children show about magic, talking ponies.