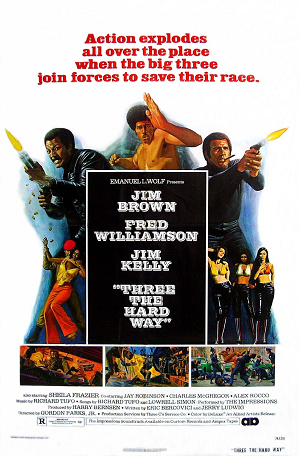 Mr. Feather: Hello, I'm Mr. Feather. I know what you're thinking. Light as a feather.
Wendy: Mister, you don't have the slightest idea what I'm thinking.
Advertisement:

1974's Three the Hard Way is an Allied Artists Blaxploitation film, in which three men have to stop a genocidal maniac from killing all of the blacks in three American cities.

A black man (Junero Jennings), whose name we discover later is House, escapes from some sort of prison-like facility, and is shot in the process. He forces a couple of Make-Out Kids from a vacant lot nearby to drive him to see Jimmy Lait (former Cleveland Browns fullback Jim Brown), a wealthy friend who takes him to a hospital (still using the Make-Out Kid's car!). Jimmy's girlfriend Wendy Kane (Sheila Frazier) persuades him to go back to his recording studio; she promises to watch House and call Jimmy if anything changes. It turns out House was being held at the private armed compound of a wealthy man, not a prison. Some henchmen go to the hospital, use a cherry picker to sneak into his room undetected, and assassinate him. Wendy walks into his room just after he's killed, and the men kidnap her.

Jimmy goes to Chicago, visits his friend Jagger Daniels (Fred Williamson) to ask for help, and is ambushed by more of the men from the compound. They go to New York City to get a third friend named Mister Keyes (Jim Kelly) for more assistance, and are attacked a third time. This round, one of the henchmen survives long enough to be interrogated.

Eventually the protagonists discover that House escaped from the compound of Monroe Feather (Jay Robinson), a rich white-supremacist who has hired a scientist to develop a chemical that can be released into the public water supply, that will kill anyone who is "black, brown or tan." The white supremacist is targeting three cities: Washington, D.C., Los Angeles and Detroit; all cities with very high black populations.

It's indeed three the hard way: three men, three cities, and a race to stop a genocidal attack before it's too late. Oh yeah, and get Wendy back from Feather.