Series / Bullet in the Face 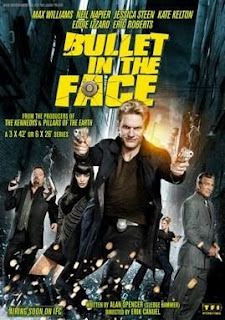 Bullet in the Face is an ultraviolent, blackly comedic Canadian-American television series created by Alan Spencer (Sledge Hammer!) that premiered on August 16, 2012 on IFC. It follows sociopathic criminal Gunter Vogler (Max Williams) who, after being shot by his lover and partner-in-crime Martine (Kate Kelton) during a botched jewel heist, wakes up in a hospital three months later with the surgically-transplanted face of the last man he killed.

Brüteville Police Commissioner Eva Braden (Jessica Steen) gives him an ultimatum: die or work for her undercover to take down the city’s powerful crime lords, Tannhäuser (Eddie Izzard) and Racken (Eric Roberts). Aided by Lt. Karl Hagerman (Neil Napier), the partner of the man whose face he now bears, Vogler must adapt to life as a cop if he wants revenge on those who betrayed him.

A police procedural with clown shoes, the story takes the Boxed Crook theme to its logical extreme: The Joker being poached by law enforcement to help solve crimes. Just as Sledge Hammer was a pastiche of 80's cop shows, the jokes also draw inspiration from John Woo films (particularly Face/Off) and Dark Age graphic novels such as Sin City.