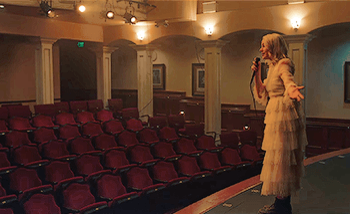 A specific type of Performance Video in which the band is playing, but there is no audience. The artist might be in a bar at closing time, or in an empty club/theater, or maybe they were On a Soundstage All Along. The kicker is that they have full lighting rigs, special effects like fog and lasers or Great Balls of Fire!, basically all the trappings of an actual concert. The absence of observers may be noted but is usually ignored.
Advertisement:

This is perhaps the most pervasive concept in use. Almost all videos, especially rock videos, will use a Dress Rehearsal performance for band footage, interspersed with footage related to the video's overarching concept; but for some videos, this is the overarching concept.