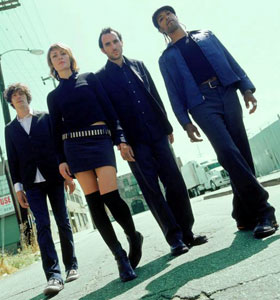 The band (originally comprised of Haines, the daughter of British poet Paul Haines, and Shaw, a Julliard-trained guitarist who she met in Toronto) formed in 1998 under the name Mainstream, and released an EP that was electronica-based. In the fall of that year, Haines and Shaw moved to New York to work on new material, renaming the group Metric as a result. During this time, they also recorded their first official LP, Grow Up And Blow Away in 2001, although it would not be released until 2007. Later that year, the group brought on Scott-Key (a native of Flint, Michigan who was studying at the University of Texas) and his friend Winstead, who both performed music and met the duo during a trip to New York. With the new lineup, Metric released their first full-length album, Old World Underground, Where Are You Now?, in 2003 and earned a Juno Award nomination for Best Alternative Album. Their follow-up CD, Live It Out, was released in 2005 and was nominated for the 2006 Polaris Music Prize for the Canadian Album of The Year and the Juno Award nomination for Best Alternative Album. Their next album, Fantasies, was nominated for the 2009 Polaris Music Prize for Canadian Album of the Year, and won Alternative Album of the Year at the 2010 Juno Awards. 2012 saw the release of their fifth full-length, "Synthetica", followed by their sixth album, "Pagans in Vegas", in 2015.

The band is known for a heavy mix of fast-paced New Wave Music/electropop music, which became their signature sound. In addition to her work with the band, Haines has performed with various indie bands, including Broken Social Scene (with Shaw), Stars (she sang the female part of "Going, Going, Gone" which was recorded before Amy Millan joined the band), KC Accidental and The Stills, and has also recorded three solo albums (under Emily Haines and the Soft Skeleton), Knives Don't Have Your Back, What Is Free to a Good Home?, and Choir of the Mind. The other band members have also branched into side projects.

They have also contributed music to the following films: