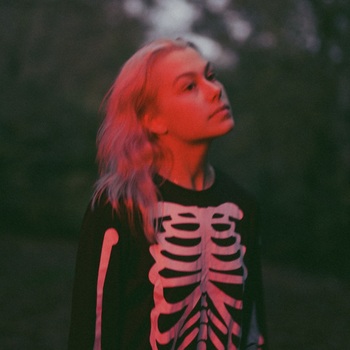 She wanted to see the world before she flew over the ocean.
"I want to be the power ballad
that lifts you up and holds you down.
I want to be the broken love song
that feeds your misery."
— "Waiting Room"
Advertisement:

Phoebe Lucille Bridgers (born August 17, 1994) is an American singer-songwriter from Los Angeles, California. Known for making both indie folk and indie rock music, she has to date released two solo albums, Stranger in the Alps and Punisher. In addition to her solo work, she has released two self-titled side-projects: an EP with Julien Baker and Lucy Dacus under the supergroup name boygenius, and an album with Conor Oberst under the name Better Oblivion Community Center.

Not to be confused with Phoebe Waller-Bridge — who, to confuse matters further, directed one of Bridgers' music videos.

Stranger in the Tropes:

"No, I'm not afraid to disappear
The billboard said, "The end is near"
I turned around, there was nothing there
Yeah, I guess the end is here."