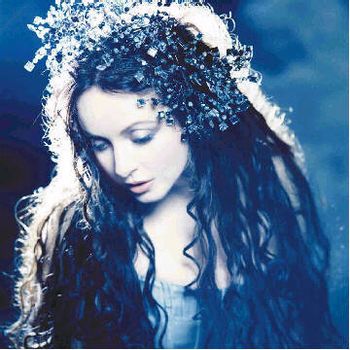 "I'm a very talented person, I know that. I'm a very gifted person. I have a lot of imagination. I work hard. I feel I have the attributes within myself to have achieved what I have done. There has been no luck, no miracles. The only miracle has been this voice."
Advertisement:

Sarah Brightman (born 14 August 1960), depending on who you ask, is best known for one of three things: playing Christine in Andrew Lloyd Webber's The Phantom of the Opera, being a classical crossover singer, or appearing in Repo! The Genetic Opera. This is a consequence of her reinventing herself enough times to rival Madonna (or perhaps David Bowie). A chronology:

The disco era. Yes, there was an era before Phantom. In her late teens, she and the British dance troupe Hot Gossip scored a hit with the song "I Lost My Heart to a Starship Trooper," which is pretty much Exactly What It Says on the Tin and an attempt to cash in on the popularity of Star Wars and similar space films that came out during this time. She released many solo singles as well.

The Musical Theatre era. Long story short, she met Andrew Lloyd Webber when auditioning for his musical Cats, married him, and starred in a number of his musicals, most famously as Christine in The Phantom of the Opera — a part written specifically for her. Much tabloid attention was had.

The early solo era. Brightman and Webber eventually divorced — more tabloid attention was had — and she released several now-obscure, rather uneven solo albums such as "As I Came Of Age." All this pales in comparison to:

The Frank Peterson era. Around the early '90s, Brightman heard the work of Enigma, liked it a lot, and got in touch with one member of the group, Frank Peterson. He has been her producer ever since (and was her boyfriend for much of the decade.) Her albums since then include:

She's also appeared in Repo! The Genetic Opera as Blind Mag, in one of the more pronounced WTH, Casting Agency? in that film.