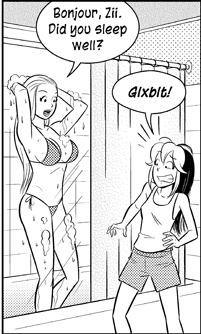 "No, no. It says it's a shower scene. I'm not supposed to be in the shower scene. It has nudity!"
— Tobias Fünke, Arrested Development
Advertisement:

A character takes a shower or a bath without being naked or is shown in the bath or shower in their underwear, a swimsuit or regular clothes. This may happen during Bathtub Bonding. Sometimes no one seems to mention or even notice that the character is still clothed. The obvious reason: It's a heck of a lot easier to film (for a PG rating!) than if the bather were nude. Frequently results when a Digital Bikini is added to edited anime. Sometimes, it's the result of a Shower Shy character being forced into a situation where they need to shower in a locker room or what have you. In videogames, it's usually because the character is supposed to actually be nude in-universe, but the game's rating means the devs had to use an underwear-clad character model.