Can't Bathe Without a Weapon 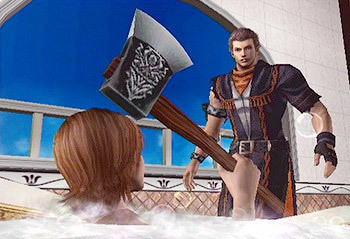 When a character is bathing it's not unusual for someone to barge in on them, or for them to be interrupted by something, or for something to attack them. But then said bather suddenly pulls out a gun to try to shoot the intruder. Or draw a blade and try to stab them, if firearms aren't an option. This indicates that the bather is an anticipator, Crazy-Prepared or Properly Paranoid type of person that does not like to feel vulnerable. They also usually don't have modesty as a priority.

The weapon is normally just placed within reach of said bather, but sometimes they may simply produce it from Hammerspace. This commonly happens in Outdoor Bath Peeping scenarios, but can also happen in Shower, Furo or Bathtub Scenes.

If Played for Laughs this can result in the intruder suffering a Pervert Revenge Mode or Unprovoked Pervert Payback from the armed bather. If it's Played for Drama a Full-Frontal Assault between bather and the intruder is likely to take place.

If the bather improvises something in the area as a weapon see Improvised Weapon. If they employ their towel as said weapon, see Cloth Fu. If the bather starts throwing random objects at the intruder, see Tantrum Throwing. If their clothes, weapons, or equipment are stolen from them while they're bathing see Gone Swimming, Clothes Stolen.

See also Pillow Pistol for a character that keeps a weapon under the pillow as they sleep and Hidden Supplies for keeping hidden stashes of supplies and Where's My Gun? for a character struggling to find their weapon in a tense situation.