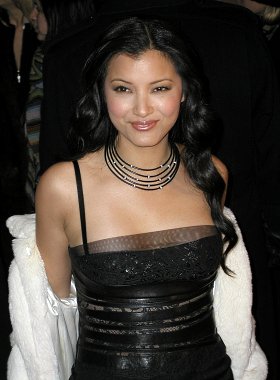 So Hu is this pretty little lady?
"It's fun being able to suit up and go and kick butt and not have to worry about memorizing dialogue. It's a whole different way of acting because you're not depending on the words at all, you're really depending on everything else that you have."

Kelly Ann Hu (born February 13, 1968 in Honolulu, Hawaii) is an American actress of English, Chinese, and native Hawaiian descent. She'd long been interested in singing and dancing, but also took up martial arts when her brother enrolled her in some classes. She even got interested in modeling since her cousin was one.

She took up various jobs, including modeling and drama, before she became the first Asian-American Miss Teen USA in 1985. After her "reign" was over, she took up modeling again, and then moved to Los Angeles to take up acting.

Her first role was a guest star as Mike's girlfriend on Growing Pains. She got small roles in several other shows, and a role as Jason's victim in Friday the 13th Part VIII: Jason Takes Manhattan, along with a number of other small film roles.

She then took up pageants again, becoming Miss Hawaii in 1993, and coming in just short of the final three in the subsequent Miss USA pageant.

Then she went back to acting, getting roles in Nash Bridges and Martial Law. She then broke into films with The Scorpion King, getting more film roles, TV roles, and even voice acting roles. And she's also into politics, in terms of getting other Asian-Americans to participate.

Recently, there's been a trend that if there's a need for a Dragon Lady in a comicbook adaptation, odds are that she'll be playing her.

It's people like this that make you realize... how little you've accomplished.

This One's description is finished.