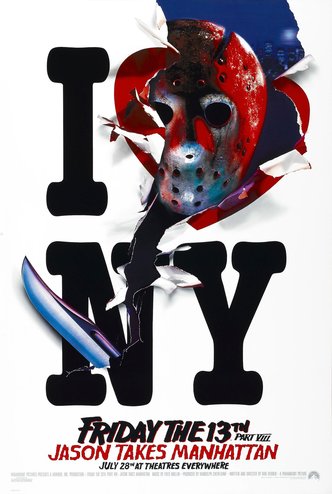 Afterwards, all Manhattanites agreed that they were better off with the Muppets.
"New York has a new problem."
— Tagline
Advertisement:

The eighth Friday the 13th film.

Jason Voorhees has spent years haunting Crystal Lake and the camp that bears its name, stalking and killing anyone who finds themselves unlucky enough to get in his way. For the last year, however, Jason has had to suffer the indignity of hanging out at the bottom of Crystal Lake itself, what with someone pinning him under a collapsed dock and all.

Lady Luck has a sick sense of humor, though. A couple of teenagers on a pleasure boat accidentally revive Jason, who climbs aboard the boat and kills the both of them. The next morning, a much larger boat docks at Crystal Lake, ready to take several teens and their chaperones on a post-graduation trip. Jason manages to sneak aboard the ship as it departs, and he eventually starts killing teens and crew alike. But when this boat arrives at its final destination (one way or another), Jason will have to contend with something for which even he is unprepared: New York City.

Jason took these tropes to Manhattan with him, so watch your step: