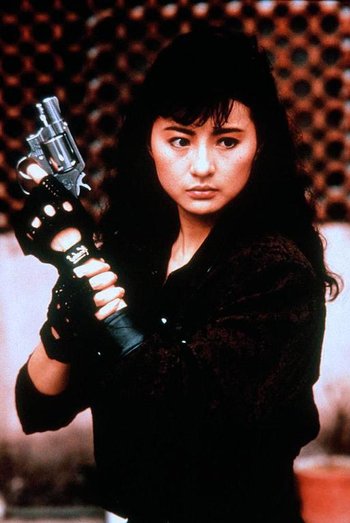 Sibelle "who?" - the last words of many mooks before getting their brains blown out courtesy of Hu
Advertisement:

Sibelle Hu Hui-zhong is (胡慧中; Hu Hui-chung; born 4 May 1958 in Taipei, Taiwan) is a Taiwanese actress, singer, stuntwoman and TV personality famous for starring in multiple Girls with Guns action films in the late 80s or early 90s, with a career spanning over 4 decades, although her peak is in the period between 1990 and 1996, where she (alongside Cynthia Khan) is Taiwan's answer to Michelle Yeoh, Moon Lee or Yukari Oshima.

Starting her career as a teen in romantic melodramas, the Taiwanese film industry had intentions to groom her to become another Brigitte Lin. But after landing a supporting role in the My Lucky Stars series courtesy of Jackie Chan and Sammo Hung, Sibelle would often be typecast in action movies, usually as no-nonsense policewomen or detectives. Finding greater success in action movies, Hu, alongside Yeoh, Oshima, Moon, Rothrock would lead the way for the Action Girl genre dominating 90s Asian cinema.

Her career have somewhat faded after her marriage to Taiwanese businessman Patrick Ho (with whom she had her only child, Audrey, in 2000), but every now and then Hu will be active in producing or promoting films, or showing up in TV dramas.