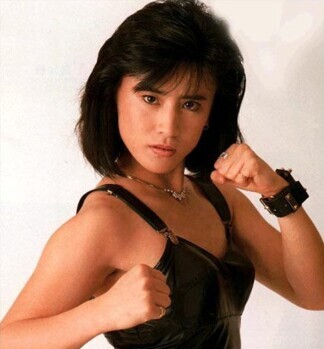 Yukari Ōshima (大島ゆかり, Ōshima Yukari, born December 31, 1963 in Fukuoka, Japan) is a Japanese actress and action star who frequently stars in late 80s / early 90s Hong Kong action films, usually in villain roles ever since starring as the cruel and lethal Yang-lin in Iron Angels and the effeminate henchman Rogan in Riki-Oh: The Story of Ricky.

Alongside Moon Lee (which Oshima co-starred with in several movies, usually on opposing sides), Cynthia Khan, Sibelle Hu and fellow Japanese action girl Michiko Nishiwaki, Oshima is one of the progenitors of Girls with Guns films Hong Kong cinema is well-known for.

Oshima took a break from acting in the early 2000s, showing up mostly in Marlboro Lite commercials as well as promoting tourism in her native hometown of Fukuoka, Japan.