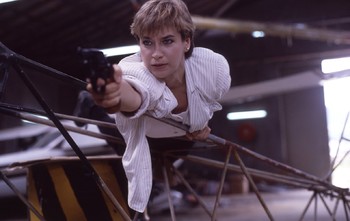 Rothrock in Blonde Fury. The most honest title, seriously!

Most Hong Kong action cinema aficionados would, at some point while watching a martial arts movie from the late 80s/early 90s, notice this gorgeous-but-deadly Caucasian woman who gets to kick loads and loads of ass and hold her own even against Hong Kong's greatest action legends, at which point they would end up questioning: "Who's that blonde chick fighting Sammo Hung? Didn't she fight Yuen Biao yesterday? And now... she's teaming up with Michelle Yeoh and Sibelle Hu to kick ass?"

Cynthia Ann Christine Rothrock (born March 8, 1957, in Wilmington, Delaware) is an American martial artist and actress frequently appearing in martial arts films, making her debut in Hong Kong cinema (usually as the gweilo henchwoman, but sometimes in important leading roles) and a household name in B-grade cinema. Ever since learning martial arts at age 13, Rothrock holds black belt rankings in seven styles of martial arts and is a high-level competitor in martial arts tournaments.

Rothrock is one of the few western performers to achieve genuine stardom in the Hong Kong film industry before success in the States. Making her film debut in Yes, Madam, Rothrock would stay in Hong Kong and kick ass alongside various martial arts icons.

She was credited as 羅芙洛 ("Fu Lok Law" or "Foo Lok Law") in her Hong Kong movies.

Rothrock is notably the inspiration behind Sonya Blade from Mortal Kombat.