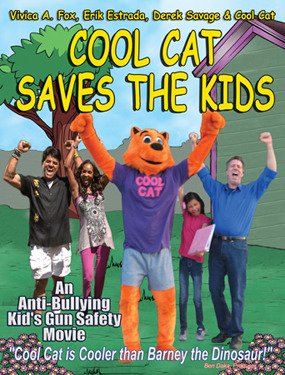 DERE HE IS!
"Remember, Cool Cat loves you!"
Advertisement:

Cool Cat Saves the Kids is a 2015 direct-to-video educational film directed by and starring Derek Savage, a man who once posed for Playgirl magazine and appeared as an extra in Back to School, Fatal Beauty and other films before turning his attention to writing and filmmaking. Its aim was to teach kids about bullying and the dangers of guns. It was patched together from three short films Savage worked on before.

It gained massive notoriety thanks to a two

review by YourMovieSucks.org and other reviews from the likes of Bobsheaux and I Hate Everything, which Savage attempted to take down as copyright infringement.

A recut of the film called Cool Cat Kids Superhero was released in late June 2018, after months of changing and unclear release dates. While many believed it would be a remake or a sequel, the finished film is nothing more than a re-release of Cool Cat Saves The Kids with a few minutes of additional scenes. In November 2021, Savage announced another recut called Cool Cat Saves the Kids: Director's Cut, which was released in early 2022.

, another sequel, called Cool Cat Stops a School Shooting, was announced by Daddy Derek, and it was meant to be a PSA specializing in school shooting/active shooter scenario education. However, despite receiving a Colbert Bump from Mumkey Jones (who would've also starred in the film), it became clear that the film's fundraising project would not be getting enough money in time for the deadline. Daddy Derek reformatted the fundraiser for a smaller backup project tentatively titled Cool Cat: Stranger Danger Alert. It was released as Cool Cat’s Crazy Dream in 2019, which was mostly just unused footage from the Hollywood parade segment of the first movie.

During the COVID-19 Pandemic in 2020, Savage announced plans to release a short called Cool Cat Fights Coronavirus. It was released to his Kickstarter supporters on March 24, 2021, as an unlisted video, with the DVD release coming later on.

No relation to a late-1960s Warner Bros.-Seven Arts character of the same name.

"And where is Cool Cat?"