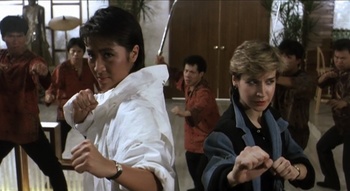 "I'll take the twelve on the left."
Advertisement:

Yes, Madam, a.k.a. In the Line of Duty, is a 1985 Hong Kong action and Buddy Cop film starring Michelle Yeoh and Cynthia Rothrock, notably the debut film for Cynthia Rothrock and the first starring role in a feature film for Michelle Yeoh. Produced by Sammo Hung, it's one of the films responsible for kick-starting the "Action-girl" craze in late 80s Hong Kong.

When a foreign dealer is assasinated in Hong Kong and a valuable microfilm is stolen, Inspector Ng (Michelle Yeoh) of the Hong Kong police is sent to investigate, but when her trail went cold thanks to a bunch of bumbling thieves - Panadol, Aspirin and Strepsil - stealing away some important evidence, against her will, Ng is forcefully paired with Scotland Yard detective Inspector Carrie Morris (Cynthia Rothrock), but soon enough the stolen microfilm attracts the attention of mob leader Mr. Tin and his minions.

While Yeoh is already a fan-favourite action star when this movie was made, Rothrock notably becomes a celebrity in Hong Kong, where Caucasian actors are usually reduced to supporting or villainous roles, and would subsequently star in bigger action films in the 90s.