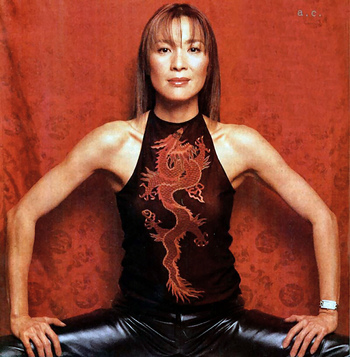 "As an actor, you hope to find roles that are challenging to you as an artist. Then if you are truly blessed, you will find that it also carries a message that you can impart to your audience."
Advertisement:

Born in Malaysia, Michelle Yeoh Choo-Kheng (杨紫琼, Yang Zi Qiong in Hanyu Pinyin), or with her full federal honour title, Yang Berbahagia Tan Sri Dato' Seri Michelle Yeoh PSM (born August 6, 1962) is a Malaysian actress and martial artist of Chinese descent, and one of the most famous modern actresses to come out of East Asia.

She has worked in the Hong Kong film industry for over four decades, starring alongside such actors as Jackie Chan, Jet Li, and Chow Yun-fat. To Western audiences, she is best known for her roles in Crouching Tiger, Hidden Dragon, Tomorrow Never Dies, Memoirs of a Geisha, and The Mummy: Tomb of the Dragon Emperor. She also starred in Jackie Chan's Police Story 3 (aka Super Cop) as well as the cult-classic Heroic Trio, Star Trek: Discovery and Crazy Rich Asians.