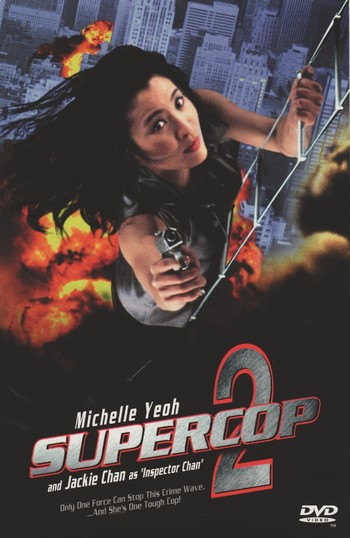 Because you need to stop Super Crime...
Advertisement:

Super Cop 2 (also known as Project S, Once A Cop, Police Story IV, and Police Story 3 Part 2) is a 1993 Hong Kong action film, a sequel to Super Cop and spin-off of the Police Story series, starring Michelle Yeoh (reprising her role as Jessica Yang from Super Cop, Louis Fan (Ricky from Riki-Oh: The Story of Ricky), Yu Rong-guang and Jackie Chan as The Cameo.

After the events of Super Cop, Jessica Yang is assigned to stop a hostage crisis, where her mission had her meeting her old flame and ex-boyfriend, David Chang Fung (Yu Rong-guang), whom she left because of duty and commitments. Determined to win her back at any cost, David leaves China for Hong Kong, promising to come back a millionaire for Yang.

Later on, Yang is once again sent to Hong Kong to assist the police, when a team of ruthless mercenaries intends to break into a high security vault, and coming with her for the mission is Inspector Martin Lee (Emil Chau) and Inspector Alan Kwok (Louis Fan). Yang will reunite with David, but David is no longer who he seems to be...