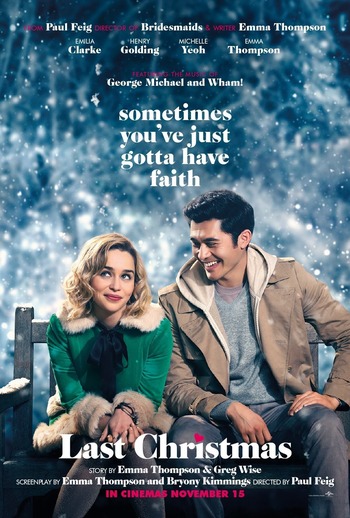 "You’re going to make mistakes, and that’s okay. You’re made of everything you do."
Kate: I’m just scared all the time. They just expect me to be normal and get on with life.
Tom: There’s no such thing as normal, and just being a human being is hard. Maybe you should do something nice for someone.
Advertisement:

Last Christmas (2019) is a romantic comedy film directed by Paul Feig and written by Bryony Kimmings and Emma Thompson, who co-wrote the story with her husband, Greg Wise. It stars Emilia Clarke, Henry Golding, Michelle Yeoh and Fabien Frankel, and features the music of George Michael and Wham!. The film was released on 8 November 2019 in the United States and Canada and 15 November 2019 in the United Kingdom by Universal Pictures.

It follows a young woman named Kate (Clarke), who has been continuously unlucky. She clashes with her family, has had a serious health scare in the past, and loathes her job at a Christmas-all-year shop in London, and dreams of performing on the West End. When Kate meets Tom (Golding) on the job, her life takes an unexpected turn.

Tropers beware! Many of the trope names themselves are spoilers, so it is highly recommended you watch the film first.