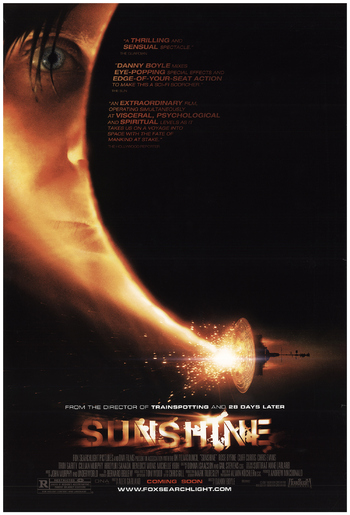 If it dies, so do we.
"Our sun is dying. Mankind faces extinction.
Seven years ago the Icarus project sent a mission to restart the sun, but that mission was lost before it reached the star.
Sixteen months ago, I, Robert Capa, and a crew of seven left earth frozen in a solar winter. Our payload: a stellar bomb with a mass equivalent to Manhattan Island. Our purpose: to create a star within a star.
Eight astronauts strapped to the back of a bomb. My bomb. Welcome to Icarus II."
— Robert Capa, physicist
Advertisement:

Sunshine is a 2007 psychological thriller disguised as a bog-standard sci-fi apocalyptic disaster movie, starring Cillian Murphy. Often overlooked due to its somewhat difficult-to-swallow premise, which sounds like The Core but in THE SUN, the film is actually a slow, melancholic character study, somewhat philosophical in tone, though never fauxlosophic.

It was directed by Danny Boyle, who would later direct Slumdog Millionaire, and had earlier directed 28 Days Later (also starring Cillian Murphy).