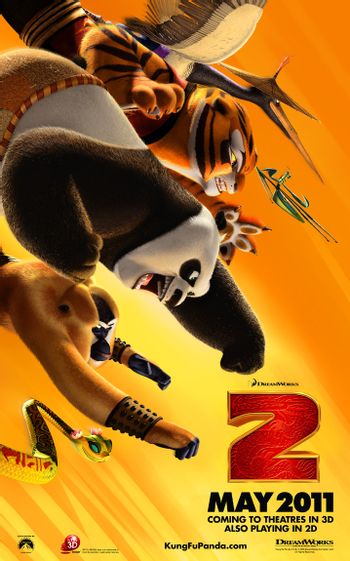 "Your story may not have such a happy beginning..."
"How can kung fu stop something that stops kung fu?!"
— Po
Advertisement:

Long ago, a peacock named Lord Shen (Gary Oldman) sought to harness the power of fireworks for a more practical use in weaponry, a cannon. His worried parents, the rulers of Gongmen City, consulted a Soothsayer, who foretold that Shen would be defeated by "a warrior of black and white". To prevent this, Shen destroyed an entire nearby panda village; but when he returned home, his horror-stricken parents exiled him. In response, Shen swore revenge and vowed to return to the city, complete his invention, and conquer all of China.

In the present day, Po, now a highly-skilled Dragon Warrior and the sixth member of the Furious Five, is trying to learn "inner peace" from Master Shifu. They're interrupted when a gang of wolves attack a village in search of metal to help in making Lord Shen's cannons. Po and the Furious Five set out for Gongmen City to stop the wicked peacock, and along the way, Po learns about his origins.

Considered one of DreamWorks' finest films, Kung Fu Panda 2 became one of the highest-grossing films of all time to be directed solely by a woman.

The Story of Shen

The Story of Shen