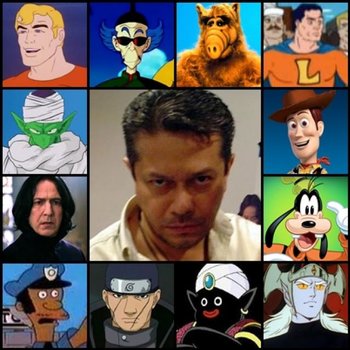 Carlos Segundo (in the middle) and some of his roles
Carlos Segundo Bravo de la Peña (born September 16, 1956) is a Mexican voice actor, announcer, television presenter and publicist. He is best known for giving voice to Piccolo (or as it's spelled in the dub, Piccoro) and Kami-sama in the Dragon Ball franchise, ALF in the series of the same name, Woody in Toy Story and Toy Story 2, and Professor Severus Snape in the first, fifth and sixth Harry Potter films.
Advertisement:

He graduated in advertising. He is currently General Director and teacher of Grupo TIP'S (Professional Interpretive Talent S.C.), recording studio, voice and image casting agency and voice and dubbing school. In this one it gives classes of basic locution, characterization of voice, commercial and conduction of events.

He has quite the acting relationship with characters voiced by either Eduardo Garza, René García or Mario Castañeda.

His son, Carlos Olizar, is a voice actor in his own right.

As the VA for Alan Rickman:

As the VA for Daniel Craig:

As the VA for Dennis Quaid:

As the VA for Denzel Washington:

As the VA for Kevin Spacey:

As the VA for Tom Hanks:

As the VA for Vin Diesel:

As the VA for Will Smith: