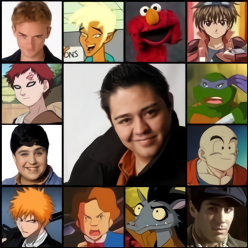 Eduardo Garza (in the middle) and some of his roles
"¡Ataúd de Arena!" Explanation  "Sand Coffin!"
Advertisement:

José Eduardo Garza Escudero (born January 10, 1976 in Mexico City, Mexico), better known as Eduardo Garza and affectionately nicknamed "Lalo", is a Mexican voice actor and voice director. While he has been around from the late nineties, he didn't achieve fame until the new century. He tends to play young boys or older teenagers, and is pretty much one of the poster boys for Tenor Boy. Also the official voice actor for Josh Peck.

He is a director in charge of the Latin American dubs of some shows, among them Dragon Ball Super.