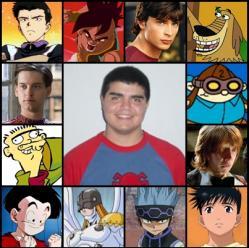 Luis Daniel Ramírez (in the middle) and some of his roles
Advertisement:

Luis Daniel Ramírez Santiago (born November 29, 1979), better known as Luis Daniel Ramírez, is a Mexican voice actor and director. He was introduced to the dubbing business as a Child Prodigy by the late Araceli de León, and was once married to her daughter Mariana Ortiz, with both of them succeeding her in a few of her roles. His daughters Verania and Verónica also continue on with the legacy, as well as his niece Jessica Ángeles, son-in-law Juan Carlos González and nephews Diego and Iván Ángeles.

His Tenor Boy voice is sometimes easily mistaken for his fellow VA Oscar Flores with the biggest difference being that Oscar mostly voices adult characters while Luis voices teenagers and young adults.

In 2021, he was accused of sexual harassment by other voice actresses, and he has been banned from several dubbing studios.