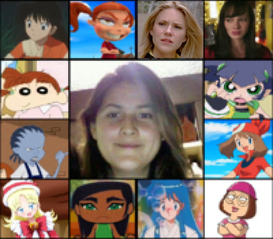 Mariana Ortiz (in the middle) and some of her roles
Advertisement:

Yolanda Mariana Ortiz León (born October 29, 1981), better known as Mariana Ortiz, is a Mexican voice actress and radio host, who started her career under the wing of her late mother Araceli de León. She did some roles as a child and retired as a teenager, but returned to dubbing in 1999 after her mom passed away.

She was married to Luis Daniel Ramírez, who is another notable voice actor. Their daughters (Verania and Victoria Ortiz), niece (Jessica Ángeles) and nephews (Diego and Iván Ángeles) are also VA's.

Mariana Ortiz's specialities are the Plucky Girls and Genki Girls, with her Star Making Roles being May from Pokémon and Okinu from Ghost Sweeper Mikami