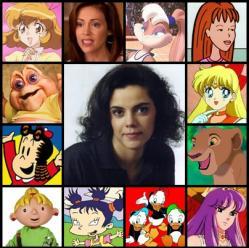 Maria Fernanda Morales (in the middle) plus some of her roles
Advertisement: