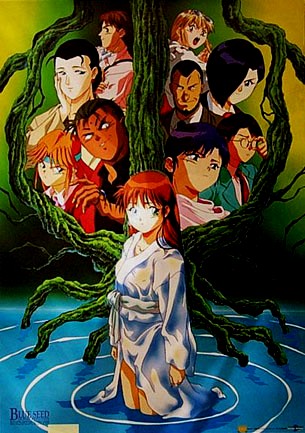 Blue Seed is (loosely) based on the Izumo cycle of Japanese mythology and the tale of the god Susanoo and the eight-headed monster Yamata no Orochi. The original manga was written by Yuzo Takada and published in Comic Ganma from 1992 to 1996. A 26 episode anime adaptation aired from 1994 to 1995.

Momiji Fujimiya, a normal middle school girl, is one day stopped on her way to school by a cat eyed man with greenish hair and magatama beads (read: blue seeds) who calls her "Kushinada" and then tries to kill her. Momiji is saved by the sudden appearance of two government officials, one of whom shoots the man in the arm and sends him fleeing.

Momiji is intrigued as to why she was referred to as "Kushinada". She discovers that "Kushinada" refers to an ancient princess whose blood holds the power to stop the ancient monsters known as Aragami by sending them to an eternal sleep. Momiji dismisses the idea that she could be such a person, despite the fact she lives with her mother and grandmother in a shrine in Izumo. However, she soon changes her mind after vines begin to appear from every crack and opening attempting to capture her as they whisper "Kushinada".

Momiji tries to escape, not knowing that the vines are being employed by a powerful Aragami known as Orochi. Fortunately, she is saved by the man with the magatamas embedded into his hands, who introduces himself as Mamoru Kusanagi. He confronts Orochi using Momiji as bait. The plan fails and the government officials appear again. They reveal themselves to be members of the Terrestrial Administration Center (TAC for short), and manage to subdue Orochi. However, with the last of its strength, it makes a final attempt on Kusanagi.

Momiji saves Kusanagi by taking Orochi's blow. Impaled by the Aragami, instead of dying, she is instead fused with the magatama, more specifically identified as a mitama, which gives Momiji the ability to sense the presence of other Aragami. The TAC agents explain that they are an organization dedicated to defeating the Aragami, who seek to destroy humanity. The current Kushinada, Momiji, must aid them because the other Kushinada, Momiji's twin sister, is thought to be dead. Momiji, wishing to discover more about the twin sister she never knew and also to fulfill her destiny, agrees to join the TAC under the protection of Kusanagi, who wishes to destroy his former masters, the Aragami.

The story becomes increasingly complex with the appearance of Murakumo, a man with eight mitamas who kills any Aragami he comes across for his own personal reasons. Kusanagi repeatedly attempts to kill Murakumo. Then Momiji's twin Kaede reappears along with a strange energy field in Tokyo, and Murakumo and Kaede's plans soon become clear - they intend to resurrect the god Susano-oh and purify the world of humanity's influences, with Kaede acting as the leader of the movement.

There is also a three episode OVA, Blue Seed Beyond (also known as Blue Seed 2), which takes place two years after the end of the TV series. It concerns what seems to be a resurgence of aragami (actually created via biotechnology), and introduces a new character, Valencia Tachibana. Like Kusanagi, she was implanted with a mitama without turning into a full aragami. That last paragraph was copied to http://en.wikipedia.org/wiki/Blue_Seed#Plot

Also has nothing to do with the "sour, yet refreshing" spice from the Lost in Blue games.