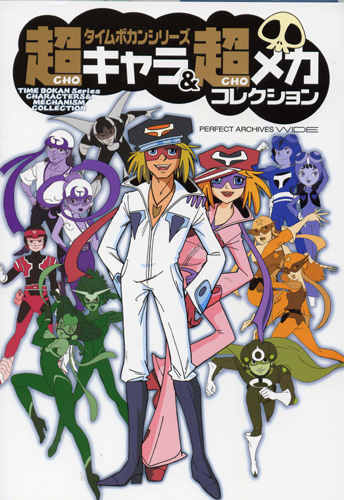 A long running meta-series by Tatsunoko Production, the Time Bokan meta-series typically involves a Battle Couple, a Robot Buddy, and Mini-Mecha based off animals stopping a Terrible Trio (maybe even THE Terrible Trio) from doing misdeeds.

The first in the series was the aforementioned Time Bokan in 1975. It involved the aforementioned Battle Couple traveling through time to find a Plot Coupon and a missing scientist, while racing and going up against a Terrible Trio consisting of a Fat and Skinny male duo and a Stripperiffic female. Following this it was decided that Time Bokan would become a meta-series and each of the sequels would carry the name as a subtitle.

The second series in 1977 would become the longest and arguably most memorable in the entire meta-series: Yatterman. While maintaining a similar plot as well as having Expies of the heroes and villains, the story this time didn't involve time travel, instead opting for a Sentai, "Mecha of the Week"-type format. Yatterman would eventually get a Revival in 2008, as well as a live action adaptation in 2009. It even found itself a sequel series in 2015 with Yatterman Night, which also serves as the Time Bokan franchise's 40th anniversary special.

The rest of series: Zenderman, Otasukeman, Yattodetaman, Ippatsuman, and Itadakiman would more or less feature the same concept. Some series would feature time travel, and others would be set in the present day. Yattodetaman and Ippatsuman are the only two series to not have a Battle Couple but rather a titular hero fighting the antagonists. They are also the only two series to feature Humongous Mecha. Following a 1993 OVA involving the then seven Terrible Trios in a parody of Wacky Races, the eighth and final series Kiramekiman aired in 2000.

Many of the series in the franchise became big international hits across Europe and Latin America, but the original 1975-76 series was the only one from the original franchise to reach the United States, in two dubbed feature-length edits titled Time Fighters and Time Fighters in the Land of Fantasy, released in 1984.

Compare to Superbook and Flying House, two other Tatsunoko productions featuring time travel that ran (on a rival channel) contemporaneous with the Time Bokan franchise, but substituting Biblical themes for the slapstick comedy and scantily clad villainesses.

In 2016, Tatsunoko announced that, as part of celebration for their 55th anniversary, they are producing a new entry in the series called Time Bokan 24, co-produced by Level-5. The new series debuted in the Fall 2016 Anime season. The 1993 OVA, Time Bokan: Royal Revival, has been licensed

by Sentai Filmworks for a US release.

Since Yatterman sort of became its own entity outside of the Time Bokan franchise, it gets its own page here.

Tropes found in most or all the series of Time Bokan:

Tropes specific for the series: