Anime / The Swiss Family Robinson: Flone of the Mysterious Island 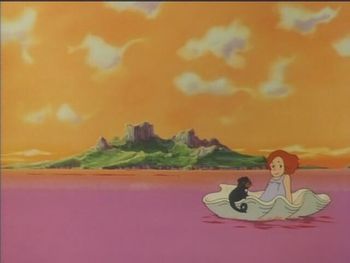 A 1981 World Masterpiece Theater anime based on the book The Swiss Family Robinson, about a family which gets stuck on a tropical island after a shipwreck and have all sorts of adventures there.

While there, they build a huge treehouse. As they explore the island, they find out they're not the only ones stuck there.

Features theme songs sung by Keiko Han, though she doesn't have a voice role in the series.

This was one of the few World Masterpiece Theater series to air in the United States, premiering on Christian Broadcasting Network's Family Channel (now Freeform) in 1989. Years later, both this and Tales of Little Women aired at the same time during the late 2000s/mid 2010s when TBN's channel Smile of a Child used to be part of it (This originally aired 10 PM/ 7PM on Mondays, Wednesdays and Fridays, but switched to Tuesdays and Thursdays). It's now released digitally on Amazon.

Now with a character page that needs some wiki love.