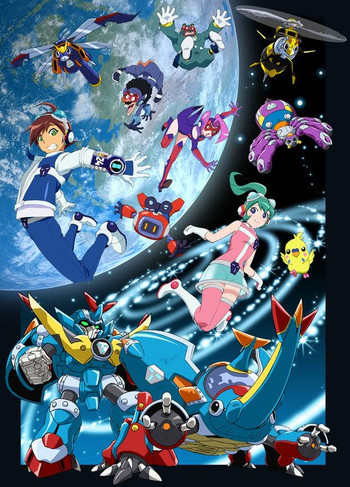 What true history will be revealed next?
Time Bokan! The explosive phenomenon that allows one to travel through space-time into the past. In the past, a history unlike that in the textbooks, one that's super hilarious, the True History, waits for you!
Advertisement:

In the early 21st century, a junior high student named Tokio lives his ordinary life, going to school and memorizing the boring textbooks. But the fates wouldn't have it that way (since then there would be no show) and he's suddenly trusted forward in time to the 24th century! Once there, he learns a shocking truth: the history that he knew, that he had to study for his tests?

The stunningly beautiful queen of ancient Egypt, Cleopatra? Actually a comic duo of Cleo and Patra. Momotarō, the fearless warrior from folklore, who defeated an army of Ogres? The guy's an even bigger asshole than the demons! Faced with this knowledge, Tokio, more or less unwillingly, becomes a field agent for Space-Time Administration Bureau. Together with his new partner Calen, her pet bird Peralino, and a robotic sidekick named Pikobo, they'll travel through time and space on board the Mechabuton, a stag beetle-shaped Transforming Mecha, in order to find the True History!

There is a dark force that opposes the Bureau, however. History Paradise, the world's largest textbook publishing company, does not want the True History to come to light. For if that would've happen... they'd have to reprint and refund all of their history textbooks, and that would simply be too costly! That's why they choose three of their "elite" employees, Bimajo, Tsubuyakky and Suzukky, to become the Akudama trio and foil Tokio and Calen's mission!

Time Bokan 24 is a Time Travel Anime series that is the newest iteration of the Time Bokan meta-series. It's one of two productions commemorating the Tatsunoko Production's 55th anniversary, the other being Infini-T Force. It is co-produced by Level-5, which will provide the mecha designs. It premiered during the Fall 2016 Anime season, and is availablenote Only in USA, Canada, South Africa, United Kingdom, Ireland, Australia, New Zealand, Denmark, Norway, Sweden, Finland, Iceland, Netherlands, Central and South America including the Caribbean. for simulcast and streaming on Crunchyroll here

A second season was announced for 2017. Titled Time Bokan 24: The Villans Strike Back, the new season switches perspective and makes the Akudarma the focus characters this turn around.